((( Update: See Congressman Alan Grayson letter to US AG Loretta Lynch dated 10/6/2015 at bottom of this page on the same problem Cassino has in Colorado regarding recording of false instruments in county land records. After that is http://osceolaclerk.com/Home/Content/forensic-examination-real-property-osceola-county the FORENSIC EXAMINATION OF THE REAL PROPERTY RECORDS AND THE CIRCUIT COURT RECORDS OSCEOLA COUNTY, FLORIDA )))

This is about Lance Cassino's complaint filed with the CFPB 8/23/2015 Case number 150823-000181 asking for CFPB help in achieving a preferred settlement with JPMorgan Chase (Chase) out of court - instead of settlement by going to court for trial by jury to finally settle this case of almost 5 years including the "partial settlement" of this case at Jefferson County District Court in March of 2013 where Chase paid $10,000 for Cassino's legal fees to dismiss without prejudice their complaint. A Settlement Agreement that Chase had no capacity or jurisdictional standing to enter into - a contract - was recorded at that time which included Cassino applying for a 4th time for a loan modification and to reform the deed of trust from 5 vacant acres by adding to it an adjoining 5 acres with home.

If no preferred settlement is made, taking Chase back to court will be the 4th time in court the last 5 years. This time Cassino seeking a judge's order enforcing his notice of rescission letter sent to on January 30, 2015 soon after the Jesinoski v. Countrywide January 13th, 2015 unanimous Supreme Court decision on how that TILA decision basically allows a "conned/fooled/lied to intentionally"  borrower  - at their closing - to do something about it. Even past the 3 year TILA statute of limitations due to unknown fraud.

But this is only when and if the borrower learns of the concealment, fraud and likely, non-disclosure of their so called "original" lender resulting in a contract that was never consummated. Again, regardless of the 3 year statute of limitations. a lender when receiving a rescission letter, must file a lawsuit within 20 days to vacate or reverse the rescission, otherwise they lose all rights and interest. Plus the loan, note and deed or mortgage are void - not voidable. 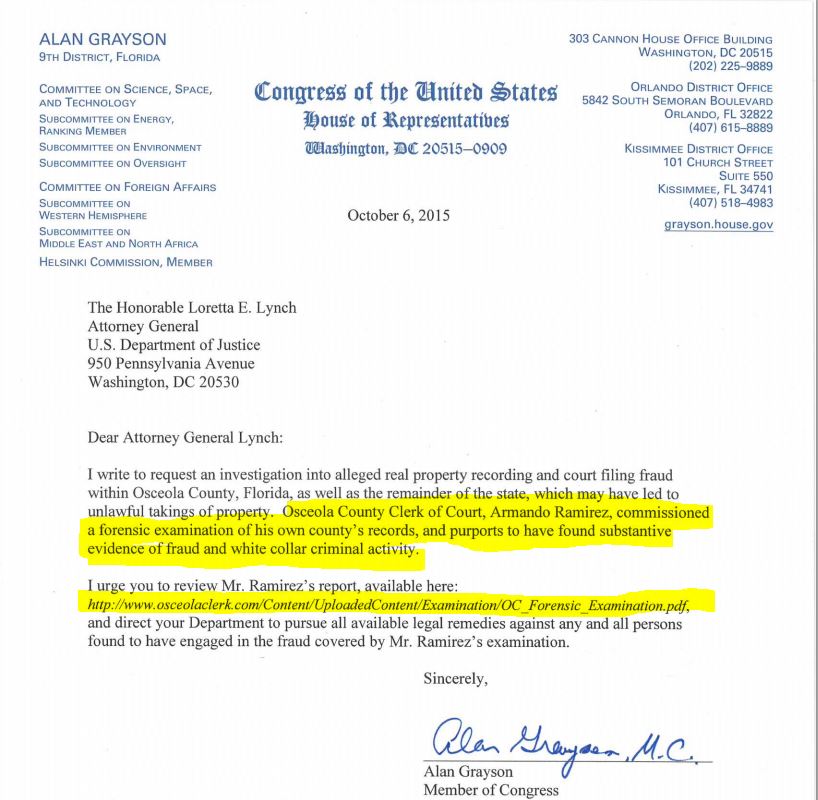 Timely article by Neil Garfield that applies directly to this case:

Rescission Litigation: What to do With that Motion to Dismiss

This is for general information only. It is not an opinion upon which you can rely in your case. Get a lawyer. But get one that has really studied this issue because the knee jerk reaction by most lawyers is that rescission cannot be real. Don’t act on anything you read here without consulting an attorney who is licensed in the jurisdiction in which your property is located.
=====================================

I have been receiving requests from pro se litigants and lawyers alike who are now faced with the prospects of early settlements where the rescission “card” has been played — i.e., the “borrower” has filed an action seeking to enforce TILA rescission duties. For the moment, the only thing the banks have come up with to escape the standing problem is to file a motion to dismiss where their standing is presumed since they were sued. But upon closer examination, any motion to dismiss raising defects in the notice of rescission is not properly filed unless the one party in the lawsuit that is actually a creditor, CAN raise the issue. And they can’t raise the issue on a motion to dismiss because the motion is raising facts (like date of consummation) that outside the four corners of the complaint. They cannot even raise the issue in an answer or affirmative defense unless they have real standing (injured party) unless they themselves already filed a lawsuit seeking to vacate the rescission.

We know that the bank lawyers are panicked about rescission. They have put on seminars for each other basically concluding that every point I have been making about rescission is correct and that they are ultimately going to lose unless someone comes up with a credible strategy. The essential problem is that they will not and can not come up with a party who has standing to challenge the the rescission and seek to vacate it through a judicial action (i.e., a lawsuit). And while they have been somewhat successful in the trial courts on some of their efforts to raise issues on motion by raising statute of limitations or other issues, they understand that on appeal, they will lose.

In my opinion, the proper course of action is to attack the motion to dismiss as an improper use of court procedure to avoid the requirements of pleading. A motion to strike the motion to dismiss would be appropriate. If you accompany that with a memo of law, you will have perfected the record. They want to try to skate by the standing requirement and the small window of opportunity to challenge the rescission and still have the old party who was merely holding paper that is now void file a motion and get rid of the rescission that way.

Judges would like to grant their motion because most of them still believe this is a gimmick by borrowers instead of seeing it for what it is — fraud by intermediaries who have no privity with either borrowers or the investors whose money was used improperly for origination and acquisition of loans (i.e., the REMIC Trust was ignored). The Judges don’t like the result either — the borrower gets a “free house” in their perception and the bank loses out on the loan. Neither assumption is true.
In virtually all cases, the borrower has heavily invested in the property and made many payments and has suffered through years of litigation and opposition to illegal acts by the players who pretend to be lenders or pretend to represent lenders.

Blaming the borrower is completely wrong. The borrower was an unwitting pawn in a game of fraudulent conversion by the banks. And “the bank” loses only some of their investment if they actually paid for the loan or they represent a party who has actually paid for the loan. If they are not creditors and they don’t represent the creditors, where is the harm? If the loan contract actually exists and has been consummated in the legal sense (offer, acceptance and consideration) and if the rescission is valid — they get paid back all the principal they loaned less the fees paid to third parties for origination of an illegal table-funded loan. Where is the harm in that?

It was the borrower who came to the table in good faith, not the banks. 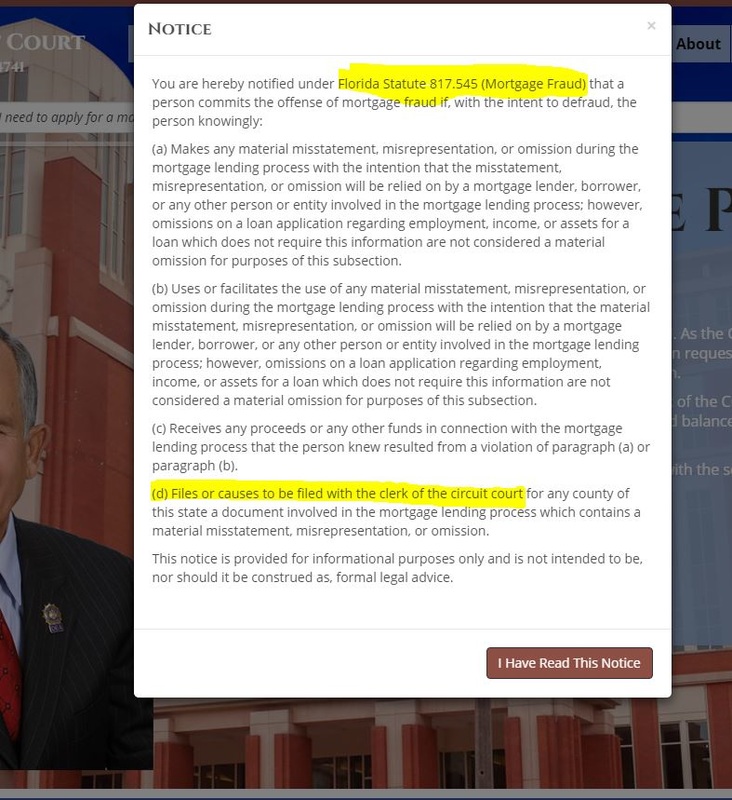 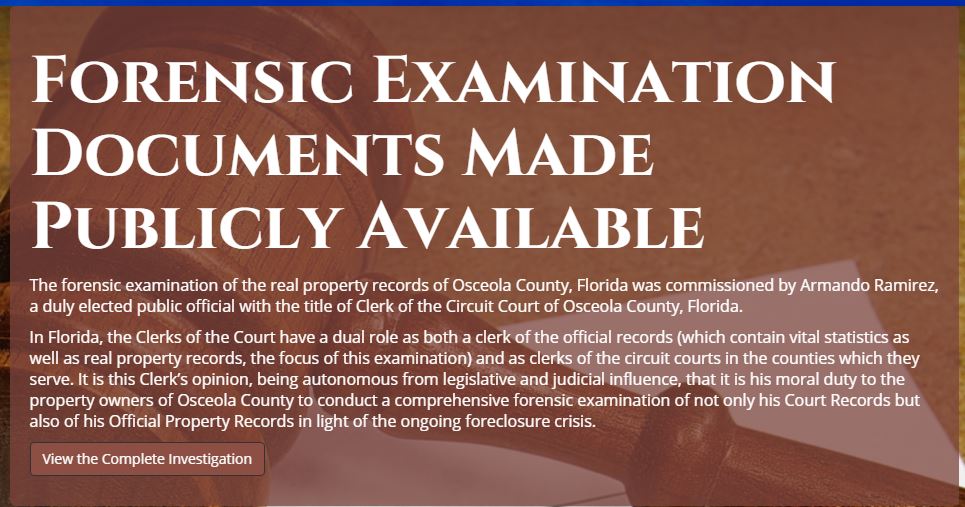 The Forensic Examination Report issued 12/29/2014 and documents are at:
http://www.osceolaclerk.com/Content/UploadedContent/Examination/OC_Forensic_Examination.pdf